Is the future of Urban Adaptation Co-development?

25 Sep Is the future of Urban Adaptation Co-development?

Posted at 15:40h in Climate, Urban by contact@codezeno.com.au
Share

Cynthia Rosenzweig, the head of the Climate Impacts Group for the NASA Goddard Institute for Space Studies has proposed that a crucial foundation for effective urban adaptation planning is to co-develop plans with stakeholders and scientists so that urban resilience can be improved. A significant challenge given we plan cities with limited understanding of co-development and integration.

From August 6–10 2018 the historic City College of New York was host to the 10th International Conference on Urban Climate. As Manhattan is the densest part of the USA, it was the perfect location for a wide-ranging discussion on urban climate and urban resilience.

I was lucky enough to be an invited speaker in the field of Climate Change Adaptation and Mitigation in Urban Environments. I took the opportunity to present my latest research findings involving how effective urban heat mitigation strategies are likely to be in Melbourne against heatwaves from the future climate. I ran several urban heat mitigation experiments including the implementation of cool roofs across the city where every rooftop in Melbourne is effectively painted white to reflect away solar radiation (like a giant Santorini), and a doubling of vegetation in the city. I found that while heatwaves are likely to be ~3˚C warmer in 2050 compared to the current climate, the urban heat mitigation strategies are as effective in the future climate as they are in the current climate. Another key finding was that doubling urban vegetation and irrigating it could be as effective at reducing the temperature as cool roofs across all of Melbourne. However, extra vegetation raised the humidity meaning that in terms of human thermal comfort, the cooler temperatures might not be noticed by people in the city as higher humidity makes it feel warmer. 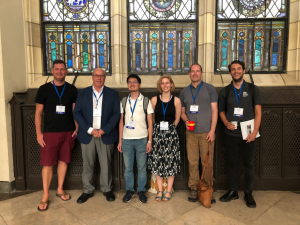 With my former Monash University research group including Nigel Tapper (second from the left), the current President of the International Association of Urban Climate, the body that oversees the conference The insights from international leaders at the conference highlighted that:

The insights gained from the wide range of talks at the conference highlight that issues facing urban areas, from increasing populations to climate change to urban heat mitigation, need to be considered holistically as there will always be an environmental, economic and most importantly human aspect to everything. Mosaic Insights enables these insights to become ideas that lead to impact. Our insights come from our unparalleled network, experienced staff and collaborative process. We generate ideas that create impact: we drive revolutionary, not incremental, change. We create sustainable, resilient, liveable landscapes that support healthy and productive communities.