Smart shading in cities means we can cope better with heatwaves 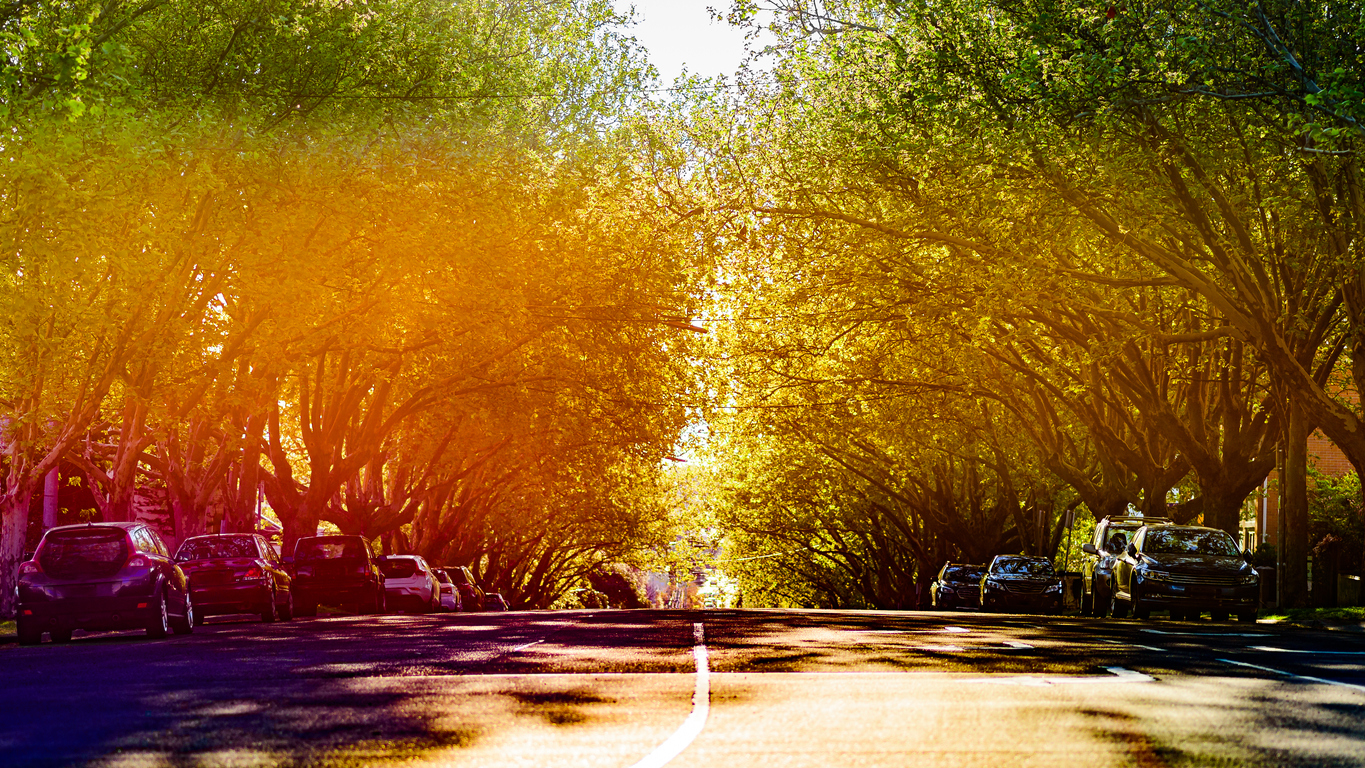 Posted at 13:32h in Climate, Resilience, Urban by contact@codezeno.com.au
Share

People living in an urban environment are more likely to be affected by increased heat than their rural cousins due to buildings, roads, and pathways absorbing and retaining much more heat (Figure 1).

The concrete jungle of the city creates an ‘urban heat island’ effect which decreases our ‘thermal comfort’ and makes a hot day feel even hotter.

Figure 1. The hard surfaces of a city absorb and reflect light and heat, making it even more uncomfortable for people on a hot day (Source: iStockPhoto)

This article looks at our thermal comfort during a hot day in the city and how this can be significantly improved by planting the right trees in the right place. We worked with landscape architects, urban designers and ecologists to look at how we can design new suburbs to maximise cooling.

With our rapidly expanding cities and our increasing reliance on local open spaces during crises like the current pandemic, we need to design, plan and build suburbs that can cater to our warming climate.

The four weather factors that influence our thermal comfort are: air temperature, exposure to radiation from the sun including reflections from different surfaces (radiant temperature), humidity and wind speed. The two largest drivers are the air temperature and the mean radiant temperature (Tmrt). The surfaces in a city can create their own microclimate by reflecting heat and light (Figure 2). On a hot day of 40oC, the Tmrt might be more than 70oC.

Figure 2. A person’s thermal comfort is determined by their exposure to air temperature, direct and reflected radiation, wind and humidity (Source: CRC for Water Sensitive Cities)

(Tmrt) Mean radiant temperature: a measure of the average temperature of the surfaces that surround a particular point, with which it will exchange thermal radiation. If the point is outside, this may include solar radiation and heat radiated off buildings and the ground. In human thermal comfort, the point the Tmrt is measured at is a person.

Humans cope with heat through perspiring and breathing. When a person is exposed to heat for a very long time, the first thing that shuts down is their ability to sweat. Once a person stops sweating, it’s not long before they can suffer heat exhaustion or heat stroke (Figure 3).

Figure 3. Average number of heat-related deaths for selected Australian cities, as estimated in the State of Environment Report, 2016

With a warming climate, we need to rethink our built environment. There are many solutions for creating a cooler urban environment that also mean a more pleasing environment visually and greater opportunities for outdoor leisure activities (Figure 4).

Figure 4. The street on the left runs east to west and is exposed to the sun more throughout the day compared to a street that runs north to south. These streets should be prioritised for planting trees to shade.

This new city, near Sydney’s Badgerys Creek airport development, is designed to be ‘a city in its landscape’, restoring and regenerating the natural ecological and water systems. The intention is to go beyond a business-as-usual approach with innovative and flexible solutions that manage urban heat and water concerns.

Mosaic Insights reviewed the master plan for employment and residential precincts in South Creek, and quantified the cooling benefits of each. The master plan included growing more trees to create shade, retaining water to irrigate grasslands, trees and rooftops, and reducing concrete surfaces.

Urban heat was modelled using The Air-temperature Response to Green/blue-infrastructure Evaluation Tool (TARGET), developed by the Cooperative Research Centre for Water Sensitive Cities. TARGET calculates the air temperature for a small region based on the make-up of land-surface data and meteorological data. It assesses map grids according to the coverage of roofs, roads, concrete, water, trees, dry grass, irrigated grass, building height and road width.

Our results showed that, over a 24-hour period, on an extreme heat day where the maximum temperature reached nearly 45˚C the master planned development would be on average 1.2˚C cooler than taking the business as usual option. At the hottest time of day (4.30 pm) the temperature would be, on average, 3.4˚C cooler (see Figure 5).

We modelled the projected effects of climate change into 2055, and the master plan development was even cooler at 4.30 pm (3.8˚C) during a day of extreme heat. This is because extra trees provide a shield to the increased solar radiation on such days, as with climate change there are expected to be more sunny days, hence an increase in solar radiation. Clearly, blue–green infrastructure is effective at cooling urban areas on very hot days.

The New South Wales Government is using our results to develop a more detailed design for construction. This will be a case study for other new suburbs in Sydney.

Choosing the best trees to plant in suburban shadeways

Planting trees in our urban landscapes changes the temperature and humidity above and below the tree as well as at the ground level and downwind. They can also change the mean radiant temperature (Tmrt) through their shading effect, by blocking radiation from the sun and urban surfaces.

We worked with Stockland; the developer responsible for the new Minta suburban development in the City of Casey in southeast Melbourne. They wanted to include ‘shadeways’ in their development to provide residents with ‘cool routes’ to access open spaces, town centres, schools and other community areas during hot days. We assessed how the shadeway changed the Tmrt.

The Minta shadeway maximises cooling by applying design principles that prioritises trees being placed where they can reduce the amount of direct solar radiation: wide open streets, east-west streets, east side of north-south streets, and north and west facing walls. Trees are planted in clusters to maximise the reduction in Tmrt, while still allowing the land to cool at night as hot air rises through the gaps.

To determine which trees to best plant in the shadeway, we compared seven species of deciduous trees selected by the landscape architect (see Table 1) to determine which would be most effective at reducing the Tmrt on hot days.

We used the SOLWIEG model to test how mature tree species would have reduced the Tmrt on January 19, 2018. This was an extreme heat day with a maximum air temperature of 42.4oC at 3pm and the Tmrt more than 70oC.

SOLWEIG accounts for shading from trees and buildings, according to the position of the sun during the day. SOLWEIG calculates direct and reflected radiation in six different directions to calculate Tmrt at a point 1.1m above the ground, ideal for a person standing at the site. It also uses meteorological data, which we obtained from the Bureau of Meteorology and spatial information about the site including where grass, buildings and roads are located.

The model then calculates the sky view factor for a location. This is the view you get when you look directly upwards (see Figure 7). This tells us how much direct sunlight is received at a location, which is the biggest influence on Tmrt.

Figure 7. The sky view factor (SVF) at a location tells us how much direct sunlight is reaching the surface, which also influences radiant temperatures (Source: A. Middel et. Al., 2018)

We worked with our colleagues at Alluvium to determine the daily water needs at maturity for each of the seven species (see Table 1).  This is an important consideration in a drying climate. Tree water demand was calculated using a model that considered climate conditions, tree canopy area, sources of water and other factors.

As can be seen in Table 1, we found that the best overall tree to plant in the shadeway was the northern red oak. This tree produced the third best cooling effect from its tall canopy without causing maintenance issues from overhanging onto buildings. These trees also needed the least amount of water to sustain them.

Table 1. Our comparison of seven trees for the Minta shadeway showed that the northern red oak was the best one to plant to achieve cost-effective shading, followed by the willow and scarlet oak trees.

The Minta shadeway is currently being planted according to our recommendations and will provide a showcase for other similar developments. The developers are already using the shadeway as a selling point to prospective townhouse buyers: “Facing onto a shadeway that provides a leafy canopy over a bike and pedestrian pathway, enabling use in hotter months”.

It is initiatives like this that will help people in cities adapt to the projected increase in hotter summer days. We already know the principles for cooling an urban landscape – increase shading, retain water and vegetation in the landscape, promote white reflective roofs, reduce hard surfaces – and it is up to planners, policymakers, developers and investors to include them in their designs and plans.