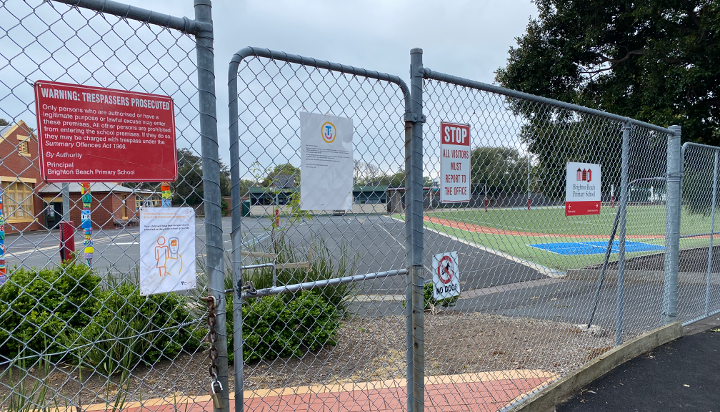 Our analysis, street by street and footpath by footpath, of Melbourne’s open spaces show there are about half a million people without open spaces within 400 metres walking distance of their homes.

But opening up schools and golf courses to public access could change that for more than 185,000 residents, reaping an estimated $25 million in benefits through improved mental, and physical health and community cohesion.

With the recent easing of restrictions by the Victorian Government [Monday 28 September], outdoor public gatherings are now allowed with all members of a household or up to five people from two households.

For Melburnians, starved of social contact and with many working from home for the foreseeable future, this means easy access to open spaces close to their homes is more important than ever. The pandemic has reminded us all of the importance of open spaces for mental health and for our overall wellbeing.

During lockdown parks and other open spaces have being used as our gyms, yoga studios, and – as restrictions are starting to ease – our social spaces and picnicking spots. The economic impact of the pandemic is significant, with large numbers of lost jobs, so the role of parks in providing free recreation and leisure space will become more important.

To understand how easily Melbourne residents could access open space we used advanced spatial analytics to identify areas where people had to walk more than 400 m to reach any open space. We found that access to open space is not equitable across Melbourne.

There are pockets of residential areas throughout Melbourne where more than one third of the population is outside easy walking distance of open spaces.

We analysed walkable networks and spatial distribution of open space across Melbourne using freely available data from the Victorian Planning Authority and Open Street Map. We analysed these data sets in combination with detailed population density data from the Australian Bureau of Statistics to estimate – at a fine scale – the actual number of people not serviced by open space.

The results of our analysis are presented in the web map below. You can scroll and zoom around the map to see what access to open space is like in different areas of the city.

We took our analysis a step further by using the ABS census to discover areas were there would likely be a high concentration of people in occupations that need to work from home, including those working in communications, public administration, finance and insurance.

Research in late June by Roy Morgan, found that about one third of all Australians had been working from home in the previous few months. Under Melbourne’s lockdown these numbers would have been significantly higher.

The trend towards working from home is likely to continue after the pandemic has subsided, making access to open space close to home even more important.

While working from home can have considerable benefits including increased productivity, performance, autonomy and job satisfaction. It can also mean that employees are professionally and socially isolated, affecting their mental health. Providing easy access to open spaces to people working from home is one way of mitigating these impacts.

Research is accumulating on the benefits of open spaces, especially green spaces, to people’s mental health.  Melbourne is renowned for its parks, gardens and waterways, which help build its reputation as one of the world’s most liveable cities.

But what can be done to improve the situation for those Melburnians without easy access to freely available open spaces? How can we support a more distributed workforce, and provide equitable access to open spaces where people can gather comfortably, even under restrictions?

Creating new open spaces can be difficult and expensive and can take significant time to deliver. For example, the City of Melbourne are creating a new 2.5 ha park at Dodds Street at a cost of $35 million.

However, a significant opportunity to increase free access to open space would be to make school grounds accessible to the public on weeknights and weekends. A few schools are already collaborating with their local councils to do just this. Melbourne’s many golf courses provide an additional opportunity.

We looked at the distribution of schools and golf courses across the city, and what that would mean for access if they were opened to the public.

Our analysis shows that the number of people without access to Victorian Planning Authority (VPA) defined open space within 400 metres walking distance would drop significantly if schools and golf courses were opened up.

We used the findings from our spatial analysis and published economic research to estimate the economic benefits of opening up schools and golf courses to the public through improved health and community outcomes. We found that opening up schools would be worth between $21 and 26 million per year. Opening golf courses to the public as open space will bring benefits between $3 and $4 million per year.

There are clearly barriers to opening schools and golf courses to a wider group of people (for example, concerns around security, vandalism, and loss of access to existing users). But these are not insurmountable, as has been shown by the community starting to use Northcote Golf Course in Melbourne as parkland and the Shared Schoolyard Project in San Francisco.

Regardless of what happens as the pandemic restrictions ease, open spaces will remain critical to Melbourne’s liveability. Our analysis of open spaces, accessibility to such spaces, and insights into potential solutions provides new insights into the provision of open space across the city. This level of understanding will be important as State and Local Governments implement Plan Melbourne, 20-minute neighbourhoods, open space strategies and public health and wellbeing plans.

Our analysis informing the planning of open spaces could be refined by considering other factors such as forecast population increases (in particular in densifying areas of the city), increasing community vulnerability to heat stress under a changing climate, and indicators of health such as the prevalence of cardio-metabolic diseases and mental health. There is also the opportunity to refine the walkability thresholds, as the blanket 400 m distance to open space has been superseded by more sophisticated metrics that relate to different types of open space.