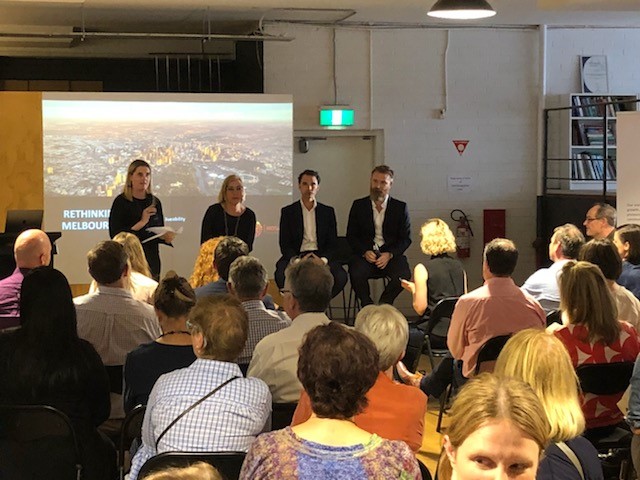 Melbourne is one of the world’s most liveable cities, but maintaining its liveability will be one of the key challenges as its population soars towards 8 million people by 2050.

Mosaic Insights has already been engaged by the Victorian Department of Environment, Land, Water and Planning to reinvigorate the Metropolitan Open Space Strategy, but we propose taking these ideas further. We believe Melbourne needs a paradigm shift in our thinking of what makes a city liveable. We explore new ideas for creating engaging open spaces, from revitalised cemeteries to climbing walls on buildings and improving community and environmental resilience through urban forests. These ideas were explored at our Rethinking Melbourne event held at our offices in Cremorne in October 2018.

The event featured three diverse speakers: Daniel Raven-Ellison the founder of the National Park City Foundation, Jacqui Weatherill the Chief Executive of The Greater Metropolitan Cemeteries Trust and Toby Kent the Chief Resilience Officer for the City of Melbourne. Further insights were provided by Mosaic Insights CEO Neil McCarthy and MC for the evening, Councillor Cathy Oke of the City of Melbourne.

The event began with Neil discussing the Design Legacy context of Melbourne, focusing on how decisions in the 1800s, such as the location of the upper Yarra fresh water catchment and the sewerage treatment in Werribee, defined Melbourne’s potential as a functional, growing, thriving and liveable city. Cathy then discussed the First Nations context in the design legacy for Melbourne. Daniel Raven-Ellison told the story of how his one idea “could London become a national park?” became the global National Park City movement. Jacqui Weatherill then spoke of how rethinking cemeteries, as a place for the living, not just for the dead, can release vast swathes of public open space in the urban environment. The final speaker, Toby Kent, discussed how Resilient Melbourne is focussing on urban forestry as one of its flagship actions and creating a Melbourne metropolitan-wide Urban Forest Strategy.

The event finished with a panel discussion featuring the three speakers with questions from the audience of over 100 people compromised of academics, local councils, water authorities and consultants.